2022 was a challenging year for the Cayce Police Department and Community.  The Cayce PD Team excelled in their proactive policing, community outreach and criminal enforcement.   The challenges posed in 2022 created greater professionalism and excellence in service.   On Friday December 9, 2022 the Chief held the 2022 Awards Banquet.   Santa and Mrs. Clause, family and friends of the PD family and Officers attended for great food, fellowship and fun.   The Chief presented the following awards; noting that the recipients were nominated AND voted on by their peers: 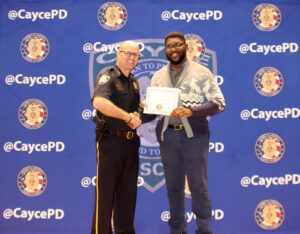 This award is presented to Wesley Walker. Wesley consistently maintains a positive attitude. His positive energy is infectious and often rubs off on members of his team . Wesley has received various “shout outs” from other team members and community members for his professional and positive attitude. Wesley follows up on and closes out many of his own cases to get the extra experience and to help out other Units. Wesley has been a great addition to A shift and is dedicated to his service in the community.
Supervisor Certificate of Appreciation:
Since starting at Cayce, Juana Saavedra has gone above and beyond the call of duty; not only for her community but for the department.  Juana was thrown headfirst into service to Cayce and never blinked an eye.  She started shortly after the murder of Corporal Drew Barr and not knowing many people at the Department never impeded her ability to care for everyone.   She stepped in and did so many things for team members, our families and the community that many to this day do not even know about.  She always has a smile on her face, a positive thing to say to everyone and her door is always open for us and the community.   Juana takes time with her victims and goes the extra mile for each one of them.  Her compassion, passion and professionalism sets her above her peers.
School Resource Officer of the Year: 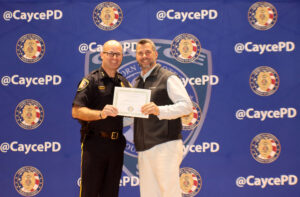 This award is presented to Gary Carnaggio. Gary consistently demonstrates his dedication to Lexington School District Two students and staff. Gary often comes in early and stays late to ensure that his students have been picked up or have gotten to their next event safely. Gary recently heard a call go out that a school bus had been involved in an accident, Gary was headed home but came back to assist patrol in getting those students safely on to another bus. Gary is committed to building trust and fostering relationships with our students. He is professional, compassionate, and passionate about others.
Life Saving Award: 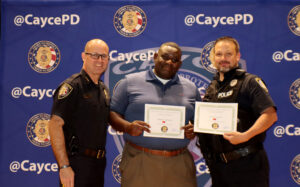 This award is presented to Bobby Johnson and Justin Smith. On November 4, 2022 while working an extra duty event Officer Johnson and Officer Smith had a student who began having difficulty breathing. A request was made by the officers to have EMS respond. Moments later the officers called for Rescue 501 due to the fact that the student’s breathing was worsening. Once rescue 501 was on scene EMS was requested. Officer Johnson and Officer Smith along with fire personnel loaded the victim up and transported her themselves due to the immediate need for transport. Officer Johnson called the ER and spoke to the charge nurse to advise her of the situation. Due to their quick thinking and willingness to go the extra mile the student was quickly discharged and has returned to school.
Administrative Team Member of the Year: 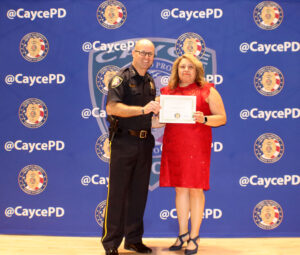 This award is presented to Juana Saavedra. Juana works tirelessly to provide resources not only to victims of crime but also to citizens in need in the City of Cayce. Juana has helped manage and oversee new community outreach programs to better service our community. Juana has shown she has a true servants heart and is committed to creating continued partnerships in our city. A large part of her nomination is her commitment to our team members and the care and compassion she continuously shows.
Investigator of the Year: 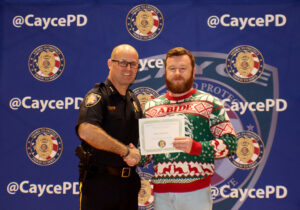 This award is presented to Sean Sinnott. Investigator Sinnott took it upon himself to identify and maintain intel on some of the most violent criminals. Investigator Sinnott worked with multiple agencies to combat recent gang violence in our area. Investigator Sinnott worked tirelessly on our gang related cases while maintaining a regular case load. He has made himself available to other members of the department when there has been a need for education related to gangs. Investigator Sinnott is dedicated to combatting gang violence and fighting crime in our city. He is professional and passionate about officer’s health and wellness taking an active role in the newly formed committee.
Rookie of the Year:
This award is presented to Austin Chawporn. Austin has excelled in law enforcement since day one. He consistently demonstrates his willing to learn and go the extra mile. Austin is eager, asks frequent questions, and always wants to handle scenes to get the experiences that will potentially make him a better officer. Austin is always willing to step in and help in times of need and always maintains a positive attitude. Austin has been a great addition to the Cayce Team. His commitment to service is exhibited in his voluntary service in the National Guard. Austin is currently deployed and we are extremely proud of his service to Cayce and our Nation.
Unit of the Year: 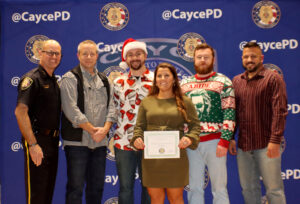 This award is presented to the Criminal Investigations Division (CID). The CID Unit consistently puts in long hours to bring cases to a close and bring closure to victims. The CID Unit initiated the “Wanted Wednesday” to better engage the community in our efforts to bring offenders to justice. Their proactive measures have led them to large quantities of illegal drug seizures, firearms, recovery of stolen property, and arrest of fugitives. The CID Unit works as a team to solve cases in our city no matter how big or small. They are committed to making our city a safe place for our citizens to live, work, and play.
Supervisor of the Year: 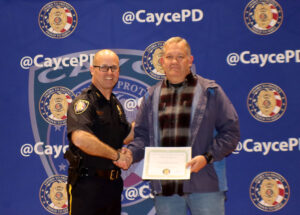 This award is presented to Dave Hoffman. Lieutenant Hoffman consistently demonstrates true leadership skills. He is always willing to take on extra tasks to assist anyone in the department. Lieutenant Hoffman has taken it upon himself to assist in finding additional resources to better assist victims of crime when he deemed it necessary. Lieutenant Hoffman leads from the front and can most often be found working and filling in wherever needed. His servant leadership makes him the perfect recipient for this award and is the second year in a row he has been awarded it.
Support Officer of the Year: 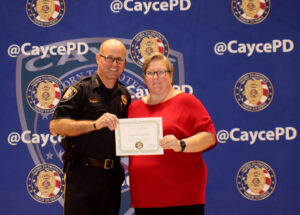 This award is presented to Cherise Clogston. Cherise has been involved in many critical incidents and always maintains a calm and stead presence. Cherise experienced one of the most traumatic calls of her career on April 24, 2022, when our agency lost one of our own and our officers were taking fire. Cherise maintained a calm and composed demeanor and single handedly called for help from every agency she could. Cherise is always the calm during many storms, and she is appreciated more than we can put into words.  Her professionalism and commitment to service, through many high-level challenges, makes her the perfect recipient of this award.
Corporal Drew Barr Officer of the Year Award: 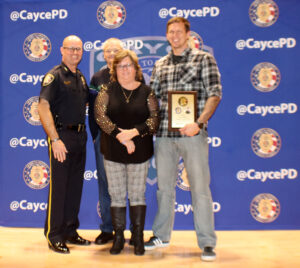 This person is level-headed, calm, compassionate, and serves our city with honor, the same as the awards namesake.  An Officer of the Year epitomizes what every officer should strive to be. Selfless service is a key trait for this award.  As is our mantra of Isaiah 6:8 Here I am Send Me. Drew lived by this and in our opinion the recipient of this award has as well.
This award goes to Ronald Gibson. On the morning of April 24, 2022, as the unthinkable took place, Sergeant Gibson placed himself in harm’s way, disregarding his own safety, and pulled Officer Drew Barr to a position of safety. He quickly assessed his injuries and while maintaining his complete composure gave updates to his team over the radio. Sergeant Gibson did everything he possible could that night to ensure the best possible outcome. He showed compassion, dedication, and bravery.
Appointment of the Patrol Captain: 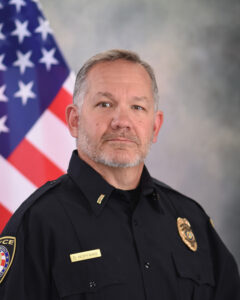 The Police Department is focused on building leaders through having high standards of professionalism, providing advanced training, and instilling a philosophy of proactive patrol operations.   In order for us to provide the best services and to continue to make Cayce the best place to live work and play it is imperative that we continue to build a leadership team that is committed to servant leadership.   Our Patrol Division continues to be the backbone of our policing services and with twenty-six years of experience in law enforcement at Cayce, having the respect of his peers, community and City Administration David Hoffman is being appointed to the rank of Captain.  His promotion comes on the heels of committed service to the City of Cayce, recently holding the rank of Patrol Lieutenant.  His appointment will make him the commander of the Patrol Division.

Thank You to the Cayce Public Safety Foundation for helping us make this night happen. We appreciate all that you do.